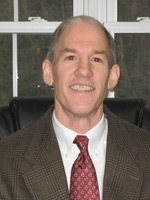 Wendell B. Stewart, III, CFP®, ChFC, CLU has been offering financial advice since 1983. He is an honors graduate from the Boston University School of Management in 1980 and was awarded the Chartered Financial Consultant (ChFC) and Chartered Life Underwriter (CLU) designations in 1989 by the American College. In 1993 he was licensed as a Certified Financial Planner (CFP® certificant.) In 1993 he was one of only 800 members nationwide admitted to the Registry of Financial Planning Practitioners prior to the International Association for Financial Planning (IAFP) transferring this division to the CFP Board in 1995. He held NASD Series 7 (general securities) and Series 24 (general securities principal) licenses prior to relinquishing them in order to work as a fee-only registered investment advisor.

He has also been admitted as a 5 star advisor to the Paladin Registry -(www.paladinregistry.com) - a service to help the investing public find a top tier and trustworthy financial advisor. Only 10 percent of applicants are admitted to the registry which requires advisors to meet a stringent host of criteria including a high level of competency and credentials, ethics, and business practices, as well as demonstrating a clean compliance and disciplinary background. He has also been consistently rated as one of the top NH Wealth Managers by Five Star Professional in service and overall client satisfaction - as published in NH Magazine. Approximately 1.4% of wealth managers in the state of NH have been awarded this distinction.

Wendell has had numerous articles published, and has lectured on financial planning to various church and community groups. He is an avid martial arts enthusiast and enjoys physical fitness and weight training, as well as a passion for jazz, blues, and gospel music.